Reaching Across Miles and Cultures 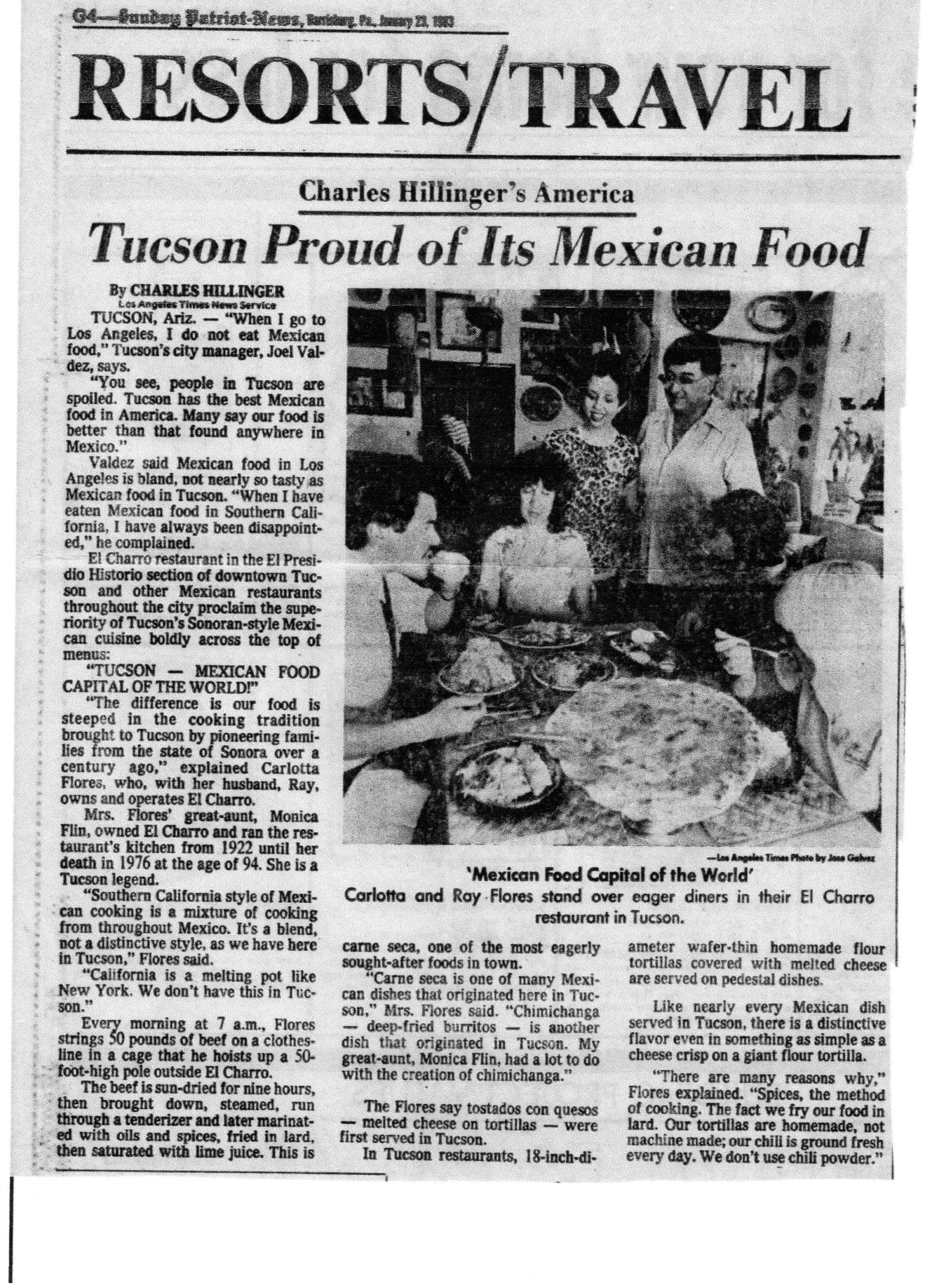 Where I grew up in the 1950s and 1960s, among mostly Pennsylvania Dutch folk in south central Pennsylvania, people didn’t really know what a taco was, or an enchilada, or salsa or tamales. When I left Pennsylvania I did discover Taco Bell but the real world of Mexican cooking didn’t open up for me until 1973 when my husband and I moved to Tucson and El Charro (downtown) was our first experience of really authentic Mexican cuisine. It was a place we returned to regularly to explore new dishes, new beers and margaritas. Despite many differences from my Pennsylvania Dutch world, I was amazed to find delicacies like carne seca that reminded me of home and the Pennsylvania Dutch who also preserved beef by drying. Then there was menudo, which like the “hog maw” I grew up on was another delicacy made from a very humble part of an animal. But no small part of the attraction of El Charro was just the welcoming ambience, the feeling that we had just walked into a small family restaurant across the border, where we were treated like just another local customer, with no pretense and lots of good service.

Anyway, the first time my parents visited from Pennsylvania in 1974, we of course had to take them to El Charro! If was an eye-opening experience as we introduced them to real Sonoran cooking, and dishes they had never tasted before. They were hooked! And yes we did expose them to other restaurants and cuisines during their week long stay and subsequently for the next 11 years. But while they never remembered the name of any other restaurant (“Can we eat at that sandwich place” or “Let’s have pizza from the place on the corner”), they always asked for El Charro by name (“We’ll treat if we can go to El Charro!”).

Years later I was cleaning out the garage as part of a downsizing effort and found 30 years of letters from my parents, including those eleven years we were in Tucson, when they visited us and El Charro. In one of the letters, they reflected on a visit to Tucson and of course, dinner at El Charro. Included in that letter was a 1983 article about El Charro in the Sunday Patriot News from, of all places, Harrisburg, Pennsylvania. The article covered El Charro’s rich history over the prior 60 years, the family behind the restaurant, the food and what sets it apart, and a photo and interview with the owners, Carlotta and Ray Flores. I’m sure my parents had shared it with half of Hummelstown before sending it on to me!

So I would say El Charro can be proud of the far reach it has had; in my case, all the way to the heart of the Pennsylvania Dutch country, with some surprising similarities amidst many cuisine differences. And I will be forever grateful for the joy this restaurant gave to my parents! I know my account is only one person’s experience but I’m certain I tell a story not so far removed from the experience of many who have visited this historic restaurant. Thank you, El Charro, for enriching the lives of so many, far and near, during the past 100 years and best wishes for your continued success.